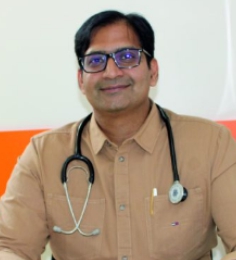 Dr. Uday Bhaskar has extensive experience in the field of Urology. His vast experience in handling very complex urological cases has made him one of the most preferred Consultants for addressing urological issues. In his illustrious career so far, Dr. Uday has served as an Assistant Professor in the Department of Surgery in PES Medical College, one of the well-known medical institutions in Bangalore.

He has performed more than 2000 Urological Surgeries so far and also has played a commendable role in assisting surgeons with Kidney Transplant Surgeries. He is outstanding in performing medical procedures including Laser TURP, Nephrectomies (Radical and Partial) and Radical Cystectomies. He has also performed more than 150 Robotic Surgeries including Radial Prostatectomy and Partial Nephrectomy..

Dr. Uday has secured extensive experience in addressing female urological issues and Andrology. His rich experience has been a guiding factor for the entire department as he inspires his team to give nothing but 100% in patient care.